Founded by King Norodom I on 8th February 1864, reformed by King Sisowath on 16th September 1905 and 1st January 1925, and entirely nationalised by King Norodom Sihanouk on 25th August 1948. Obsolete 1970. Revived by King Norodom Sihanouk on 5th October 1995 and reformed again in 2002. Awarded in a special class (Grand Cross with Collar-conferred on Heads of State only) and five ordinary classes (1. MahaSirivudha-Mohaséreivathor Grand Cross, 2. Mahasena-Mohasénaor Grand Officer*, 3.Adipati-Thibadin or Commander, 4.Séna or Officer and 5.Askararidha-Assarith or Knight)

The Grand Order of National Merit of Cheatopka 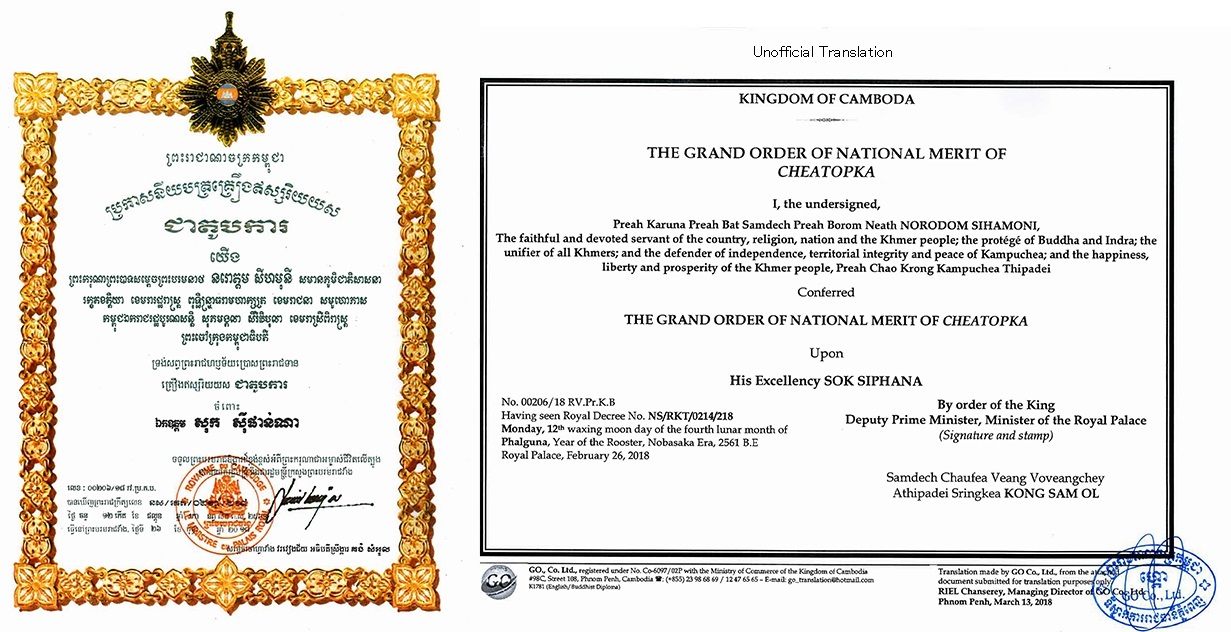 The Grand Order of National Merit of Cheatopka (Khmer: Cheatopka) was founded by King Norodom Sihanouk on 5 October 1995. It is awarded in one class to foreign heads of State and to Cambodian nationals who have performed exceptional services to the nation.

This year New Zealand celebrates its 40 years anniversary of its relations with ASEAN. I was selected as one of two Cambodian recipients of the New Zealand ASEAN Award. The New Zealand Foreign Minister H.E. Murray McCully and the New Zealand Ambassador H.E. Reuben Levermore were there to present me the award. It was such a big honour for me, for my family and my country.